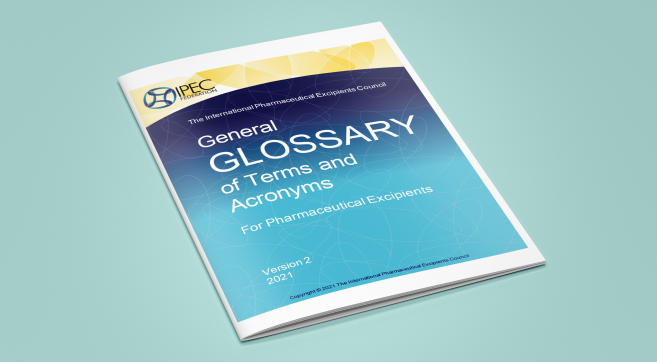 While updating the IPEC General Glossary of Terms and Acronyms for Pharmaceutical Excipients, the team developed a strategy with the following rationale for determining when a term/definition should be included in the IPEC Glossary:

Rationale for what terms/definitions should be included in the IPEC Glossary.

Term/definition should be one of the following:

Terms/definitions not included in the IPEC Glossary

Terms not meeting the above criteria, which are currently bolded in at least one IPEC guide (indicating definition found in the IPEC Glossary), were highlighted (along with [reference to the guide(s)]). As the current versions of these guides are updated, highlighted terms will be un-bolded and eventually removed from the IPEC General Glossary.

Another new feature to this Glossary is a column that includes reference to a list of external sources where the term has been defined.  Several of the sources include ICH Guidelines and WHO Technical Reports where the definitions are often more applicable to API than excipient; therefore, the defined definition in this Glossary may have been modified to be more appropriate for an excipient.

In addition to the updated IPEC General Glossary of Terms and Acronyms for Pharmaceutical Excipients, an excel workbook containing mapping for terms and acronyms found in each of the current IPEC guides was developed and will be available to IPEC members.  The Excel workbook also contains a list of ~700 pharmaceutical terms and definitions currently found and defined in external glossaries (e.g. ICH Guidelines, WHO Technical Reports, FDA Guidances and webpages).

The guide will be available on the IPEC Federation and national/regional members’ websites.